Apartment rents increased faster last year than at any time since 2007, a boon for landlords but one that has stoked concerns about housing affordability for renters.

Average effective rents nationwide rose 4.6% in 2015, the biggest gain since before the recession, according to a report by real-estate researcher Reis Inc. The average apartment rent now stands at nearly $1,180, up from about $1,125 a year ago.

Another report from Axiometrics Inc., a Dallas-based apartment research company, showed that rents increased 4.7% in the fourth quarter compared with the same quarter a year earlier, the strongest year-end performance since 2005.

The fourth quarter “wrapped up an incredible year for the apartment market, probably the strongest we’ve ever seen,” said Jay Denton, senior vice president of analytics at Axiometrics.

Rents have marched steadily higher for six consecutive years, in part because of tough lending standards for home buyers and in part because of a shortage of apartments for middle-income renters. The homeownership rate in the third quarter stood at 63.7%, near a 30-year low.

Unlike home prices, which crashed during the recession and have taken years to recover, rents scarcely dipped during the downturn. Since then annual increases have accelerated from 2.3% in 2010 to about 4% in each of the last two years. Over the last 15 years, rents have increased by an average of 2.7% annually, according to Reis.

In general, the higher rents go, the more difficult it will be for young people to save for down payments, making them likely to rent even longer. The percentage of first-time buyers among all home buyers is at its lowest level in three decades, according to the National Association of Realtors.

In some cases, meanwhile, professionals well into their 30s are choosing to rent rather than buy, preferring the financial flexibility and the proximity to restaurants and bars.

Alezandra Russell, a 34-year-old founder of a nonprofit, and her husband sold their five-bedroom house in suburban Maryland in 2014 in favor of an 800-square-foot apartment they rent in downtown Baltimore for about $2,500 a month.

Even though the rent has increased slightly every year, she said renting has given them much more financial freedom than when they had a mortgage that they were “stressed out about constantly.” 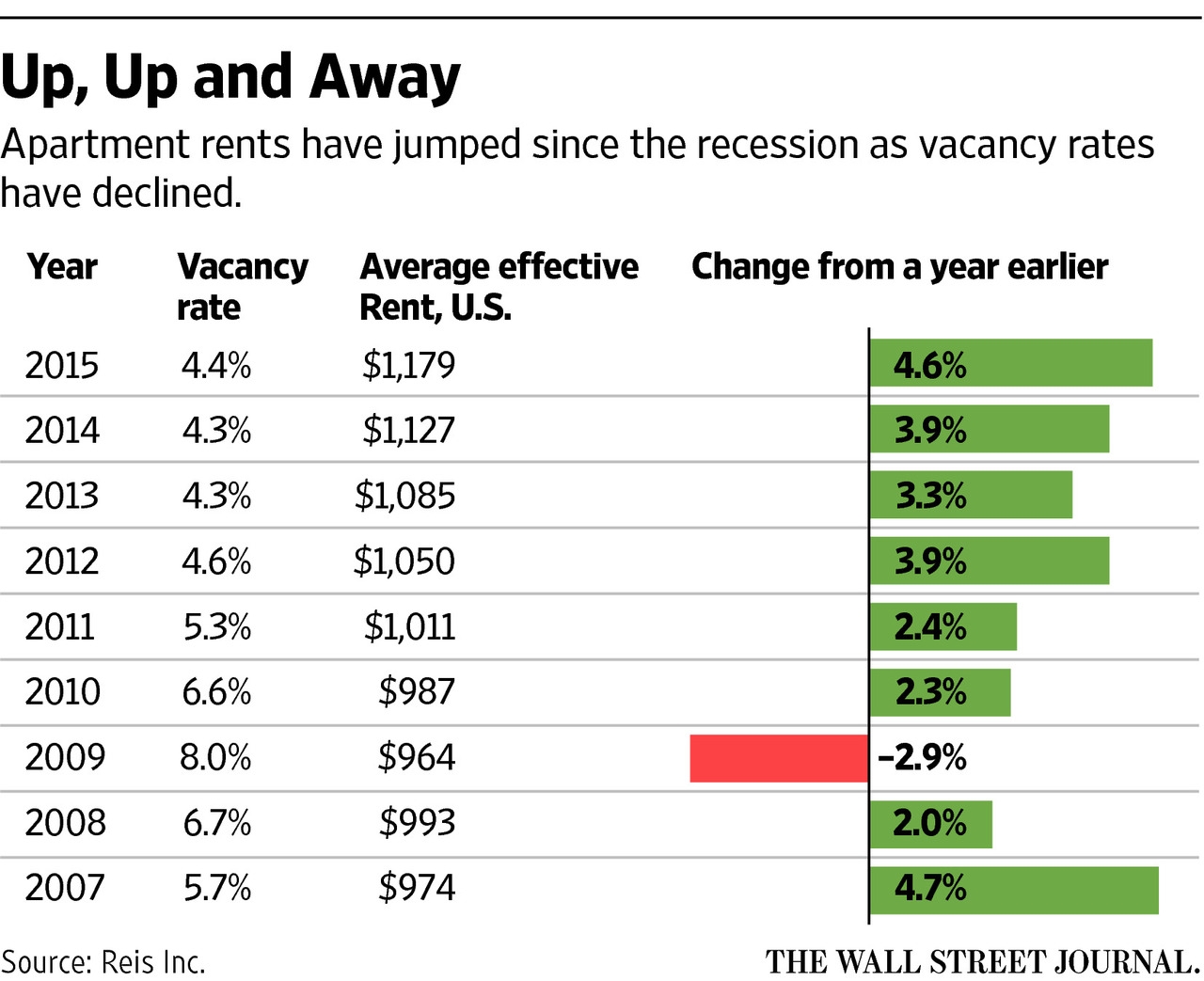 Analysts say the apartment market is showing some early signs of peaking. Vacancy rates rose slightly in the fourth quarter to 4.4% from 4.3% in the previous quarter.

The main factor: a flood of new supply, which is especially likely to weigh on rents in high-end buildings in downtown areas. In all, more than 188,000 apartment units were completed in 2015, the most since 1999, according to Reis.

Bob DeWitt, president and chief executive of GID, a Boston-based apartment owner and developer, is currently involved in developing 15 apartment projects across the country. But he said the increased competition is starting to limit how much more rent tenants are willing to pay.

“We certainly believe that over the next two or three years rent trends are going to slow and in some places they may actually back up,” he said.

Both reports showed that some of the hottest markets in the country are finally starting to cool, while smaller, less expensive ones are starting to heat up. That might reflect the fact that the affluent renters that dominate those markets are reaching the limit of how much they can afford and are moving to older buildings or neighborhoods farther from downtown.

Meanwhile, rents in Portland, Ore., traditionally a more affordable city, jumped by 12% in the fourth quarter from a year earlier, Axiometrics said.

Kimberly Minasian Sparks, a rental broker in Portland, said a few years ago she could easily find clients a one-bedroom apartment in the $900-a-month range. Today, she is lucky to snag one for less than $1,500.

Much of the new demand in Portland has been driven by people fleeing cities such as Seattle and San Francisco, where rents have shot up beyond what many people can afford.

Diana Comstock, a 42-year-old painter, moved to Portland from Santa Barbara last summer. She said the local moms’ group she belongs to on Facebook is full of people decrying huge rent increases driven by people coming from out-of-state.

“I tend not to tell people I’m from California,” she said. “You can’t blame people for coming here when it’s a good bargain.”

BlueVault saves a lot of time and effort in obtaining good numbers for analysis and provides good insights to compare against my own.